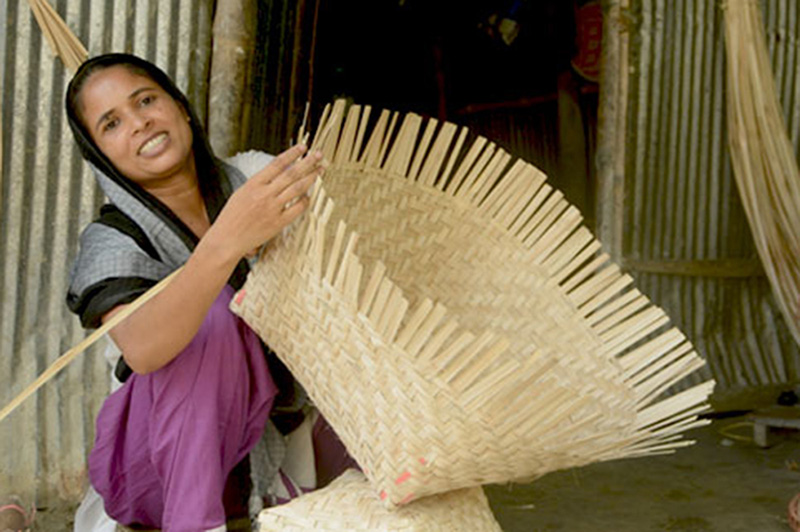 “Maybe I am alone for me; I created my world myself, but I am happy. I am not dependent on anybody. I can fulfill my needs myself,” Manjuma said happily.

Manjuma became a “sinner” when she lost her second husband, Shafiullah. Shafiullah worked in Saudi Arabia as a physical laborer when he suffered a fatal heart attack. After losing a husband for the second time, neighbors started to treat her as a living curse. She lives in Chiloin village of the Ajgora union in the Laksam Upzila of Comilla district.

Mr. Murshid Alam was Manjuma’s first husband. They married when she was fourteen years old, barely just a ninth grade student. According to Manjuma, it was a “happy life” and she soon gave birth to her first child. One day, an accident occurred while her husband was working in the fields. Unfortunately, Murshid was caught between the open electric wires of his neighbor’s house and passed away. The young widow was forced back into her father’s house along with her newborn daughter. Manjuma was only seventeen years old.

Due to her father’s economic hardships, it was very tough to financially maintain a family of seven members. Moreover, Manjuma was a widow with a young child. Her father soon arranged for her to be married, once more, to a man named Shafiullah.  As Shafiullah was working in Saudi Arabia at the time, they officially married by phone, and she moved into her in-laws’ house without her husband. Shafiullah came home to Bangladesh after being away for a year, only to return to Saudi Arabia after just two and half months. During his brief stay, Manjuma became pregnant. When her pregnancy was in its fifth month, Manjuma went back to her father’s house according to local tradition. However, instead of a happy return home, she was welcomed with the news of her husband’s death in Saudi Arabia. She was denied even the opportunity to see and mourn her husband’s body. Without Manjuma’s knowledge or consent, members of her husband’s family cheated her by embezzling all of her compensation money.

This event furthered society’s perceptions of Manjuma’s as a “curse”. Villagers shunned her and no one would look her in the face. Under these circumstances, Manjuma gave birth to her second baby girl. “At that time, I forgot how to cry. I had no tears in my eyes,” she recalls. “As my father was a poor man, I became a huge burden on his shoulders.”

To help her father in his line of work, Manjuma began crafting bamboo baskets and selling them at their local market. She never imagined this vocation would come to change her life.

In 2015, Manjuma was invited to join a Women Leaders’ Training Program conducted by The Hunger Project-Bangladesh. Manjuma was reborn and revitalized after receiving this training. She quickly realized that by assuming this profession full-time, she could steer her life in a different direction. Manjuma started crafting bamboo baskets on her own, in addition to rearing cows and helping her father in the field. She undertook further training in tailoring and received a sewing machine from The Hunger Project. Now, Manjuma also sews clothes for her neighbors and earns enough money to support her family.

Despite all this, her neighbors are still barriers for her. They tease her when she goes to the market or organizes other women for their empowerment. However, she does not care about their attitudes or let them bring her down. “Maybe I am alone for me; I created my world myself, but I am happy. I am not dependent on anybody. I can fulfill my needs myself”, Manjuma said happily.