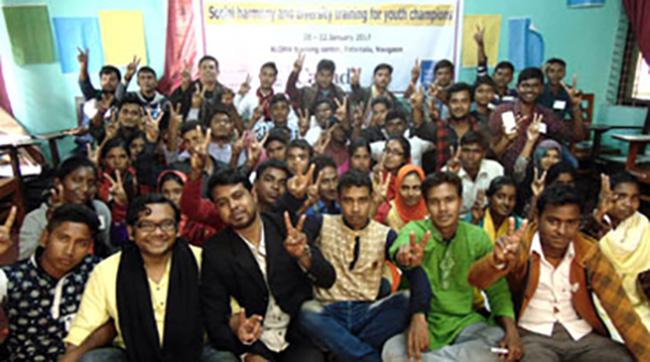 The Hunger Project-Bangladesh is implementing a project called “Empowering Youth Champions for Increasing Tolerance and Social Harmony” across nine Unions (Nirmoil, Dibar, Akbarpur, Matindor, Krisnopur, Patichara, Patnitola, Amair, and Shihara) of Patnitala Upazila in the Naogaon District of Rajshahi Division, funded by The Canada Fund for Local Initiatives (CFLI) of the High Commission of Canada in Dhaka, Bangladesh this January 2017.

The objective of the project is to empower a group of youth champions to promote social harmony and tolerance in target areas.

With this objective in mind, the project intends to empower a group of young people with training and guidance to further the cause of social harmony and pluralism over nine Unions of Patnitola Upazila in the Naogaon District.

The project organizes twenty-seven half-day workshops on Vision, Commitment, and Action at the ward level across nine Unions in order to identify the potential youths for promoting and protecting diversity and tolerance in Bangladeshi society. A total of 678 inspired and motivated youths are chosen to increase social harmony and tolerance towards minority groups in their communities.

The project also trains 130 potential youths to create cadres of Youth Champions to promote social harmony and enhance their ability to be engaged in their communities. The participants are knowledgeable, highly motivated, and committed after receiving the training to build peace, social harmony, and diversity around them and in their localities. The youth participants are well-equipped with leadership, community engagement, and social-inclusion skills to promote tolerance and pluralism throughout the training. They demonstrate their commitment to take responsibility for arranging Social Harmony and Diversity Workshops at the Ward levels in their communities.

The project is planning to organize a three-hour long Social Harmony and Diversity Workshop as part of sensitizing the wider community to promote tolerance and pluralism in each Ward with approximately twenty community participants this February 2017. In these workshops, participants engage in discussions on the importance of social harmony and tolerance as a means of protecting youths from radicalization. Through these workshops, the project engages local political leaders, social leaders, and other vulnerable, victim groups to promote diversity and pluralism.

A day-long workshop will also be held with the elected Union Parishad body, local civil society groups, political leaders, religious leaders, and minority representatives. These workshops will sensitize 180 participants on the importance of pluralism, diversity, and social harmony. After the workshop, the participants will be able to play the role of watchdogs for protecting and promoting diversity and increasing tolerance.