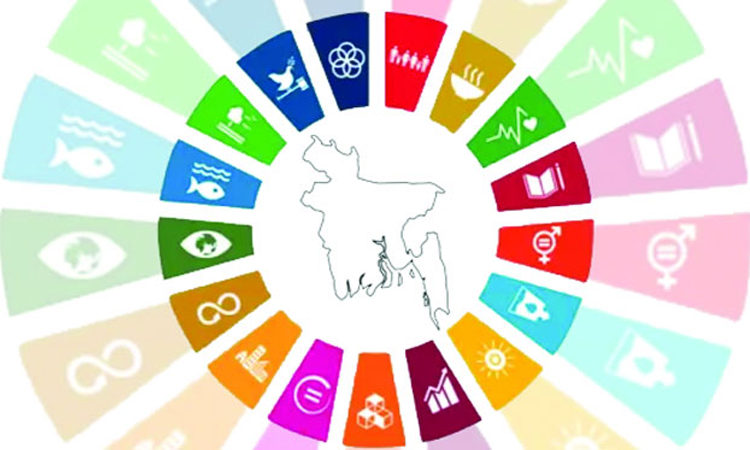 Translation of a Bangla article written by Dr. Shamsul Alam, Member (Senior Secretary), General Economics Division (GED), Bangladesh Planning Commission, following his visit with a team to Gangni upazila, Meherpur district, mobilized by The Hunger Project. He published it in The Daily Ittefaq (2 April 2020), one of the largest circulated newspapers in Bangladesh. For those not familiar with Bangladesh, the administrative structure from largest to smallest are: Division, District, Upazila, Union, Ward, Village.

It is not possible to achieve sustainable development goals (SDGs) solely by the UN and national level programs at the call of the world or government leaders. These multifaceted development goals have to be achieved by participation of local leadership and local people with the use of local resources. Transparent, effective and accountable institutions have to be established at all levels of the society, where the decision-making process will be participatory. If the 2030 global agenda is implemented at the local level on the basis of partnership with people of all segments of the society, a massive socio-economic, environmental and ecological development will occur and the targets of SDGs will be easily achieved. (SDGs localization plan would be a quick yielding panacea to counteract the COVID-19 fallout both in the medium and long term.)

It is important to note that since 2016, the Government of Bangladesh has taken many important initiatives at the national level for the successful implementation of the SDGs. In the meantime, a national work plan has been prepared by assigning the functions of the ministries and departments based on the targets and indicators of the SDGs. In order to achieve the SDG targets, Data Analysis has been done to identify the data gap and a report on the ‘SDG Monitoring and Evaluation Framework’ has been prepared for evaluation and monitoring of implementation progress, and accordingly the first evaluation report of the SDG has been published in 2018. The goals and targets of the SDGs are reflected in the Government’s ‘flagship development plan’ i.e. in the seventh five-year plan (2016-2020).

In this context, an ‘SDG Localization Framework’ has been formulated by the General Economics Division (GED) of the Bangladesh Planning Commission, through which a working plan was prepared for the localization of the SDGs in all the upazilas of Bangladesh. There are several important steps in the SDG localization framework developed by the GED. It is clear from the SDG localization framework that the first stage of localization is to formulate an SDG-centered local annual and five-year plans in order to determine the amount of money, human resources, infrastructure development that will be needed at the upazila, district and divisional levels to achieve local targets. For this, it is necessary to first create an SDG plan to meet the local priorities and targets. The government is closely involved with the SDG localization process. Hence, it is imperative at the initial stage to plan the localization initiative from the upazila level. Later, these activities could be spread towards unions. It is necessary to start localization work at the district and upazila levels using the existing administrative structure of the government. Therefore, it is necessary to have a manual or guideline for the formulation and implementation of an SDG localization plan at the upazila and consolidated plan at district level. Recently, a committee for the implementation and coordination of SDGs has been constituted at the upazila, district and divisional levels under the direction of the Cabinet Division. Its main responsibility is to adopt the action plan, implement, coordinate, and monitor the implementation of the SDGs, giving importance to the SDG priority list of Bangladesh. Localization of SDGs has already been undertaken in Natore at the district level with the help of the existing committee for SDG localization, but no work plan for localization at the upazila level has started yet. However, some NGOs have taken initiatives to localize SDGs at the union level. In this context, several steps have been taken by The Hunger Project to achieve the SDGs and formulate local level planning in the Saharbati Union Parishad under Gangni upazila of Meherpur district.

Institutional linkages are important to implementing the SDGs: The first thing that becomes clear is that there is a difference in SDG implementation approach of the Meherpur NGO experience and the SDG localization framework developed by GED. The GED’s SDG localization structure is mainly upazila-centric; but The Hunger Project’s SDG implementation of Saharbati Union in Gangni upazila of Meherpur is union-centric. Subtle observation shows that in THP’s approach, the upward link between the upazilas and the Union Parishads has not been fully established in the implementation of the SDGs. However, in order to implement the SDGs at the union level, ‘The Hunger Project’ signed an agreement with the Saharbati Union Parishad of Gangni in 2016 to build it as a model ‘SDG union’. A community-led development approach is the core strategy of The Hunger Project for localizing SDGs. The Union Parishad’s involvement in the implementation of the SDGs has been ensured by training them as ‘Animators’ through the Special Animators’ training. The group of trained volunteers created by The Hunger Project include: (1) Animators, (2) Women Leaders, (3) Youth Leaders, (4) Community Facilitators, (5) Members of National Girl’s Advocacy Forum, (6) Participatory Action Research by the ultra-poor (PAR) Facilitators, (7) Trained Women Nutrition facilitators, (8) Volunteer civil society leaders, and (9) a Concerned Citizen Committee. With the leadership of these volunteers, a total of nine village development teams have been formed in Saharbati Union, and village based priority assessment and formulation of plan have been formulated through a baseline study by using social mapping, well-being ranking and problem ranking tools.

There are three main components of The Hunger Project’s strategy of localizing SDGs in the Saharbati Union Parishad: (a) planning, (b) finalizing development priorities, and (c) implementation of activities. The Union Parishad formulates the plan in five steps:

The second phase in the SDG localization is the formulation of the development vision for the union and the finalization of priorities based on the participation of people of all levels of the society. In localization of the SDGs, Saharabati Union’s vision is to “create a prosperous union by ensuring modern and environment friendly production, improved education and health, social justice and good governance, whereby every woman, man and child can reach their full potential.” The priority areas of Saharbati Union include improvement of education; development of agriculture, livestock and fisheries; development of livelihoods; development of environment and plantation; resolving family disputes and preventing violence against women; communication and infrastructure development; safe water and sanitation; increased efficiency and good governance of the Union Parishad, prevention of drugs, terrorism, and militancy and promote social harmony. It is important to note that the priority areas of the Saharbati Union are similar to the potential action areas identified under the framework proposed by the GED.

In the localization of the SDGs, ‘The Hunger Project’ basically works to mobilize and empower the people at union level. Since 2016 in the Saharbati Union, The Hunger Project conducted 91 `Vision, Commitment and Action Workshops’ with the community people, in which 1,101 women and 837 men participated. In addition, 7 workshops with youth, 4 PAR workshops, 12 RTI workshops and 120 Citizenship workshops have been organized, where 1,530 female and 948 male participated. In addition, 36 workshops on social harmony and 1,520 issue-based campaigns and court-yard meetings on 15 different issues have been arranged, in which 40,373 community members took part.

Required financial resources mobilization to implement the SDG localization program are very important. Among the possible sources of funding identified in the implementation of the plan adopted for the localization of the SDGs in the Saharbati Union Parishad are: the District and Upazila Projects and LGSP; private sector / donors; Kabikha (Food for work), kabita (Taka for work), employment generation schemes; donation from local wealthy; volunteers based social capital; surplus of Union revenue budget, land transfer tax (1%); and the programs/resources of various departments/projects allocated for the Union Parishad. A closer look at these potential sources of financing show close similarity with the five sources mentioned in the ‘Demand Assessment and Financing Strategy for SDG Implementation’ proposed by GED.

Future approaches or recommendations for strengthening SDG implementation at the local level:

From the field visit to observe SDG localization, it is clear that the Upazila Parishad is the first step towards SDG localization. However, since the Upazila Parishad is made up of several unions, the union is the center-point of all connections. In this case, if the government takes the initiative to create ‘SDG Model Unions’, it will be helpful for the Upazila Parishad and other local government organizations to play an important role in implementing the SDGs. For this purpose, in order to strengthen the SDG-related activities at the local level, all government offices and agencies under the Upazila Parishad need to be strengthened with transparency and made accountable for their performance, according to the ‘Local Government Act, 2009’. Upazila administration can be instructed to take integrated steps, (sooner the better). (SDG localization plan would be a quick yielding panacea to counteract the COVID-19 fallout both in the medium and long-term.)

(Sentences or parts of the sentences in parentheses are added by Dr. Alam, which were not in the published Bangla version.)

One response to “Why localization of SDGs is important”