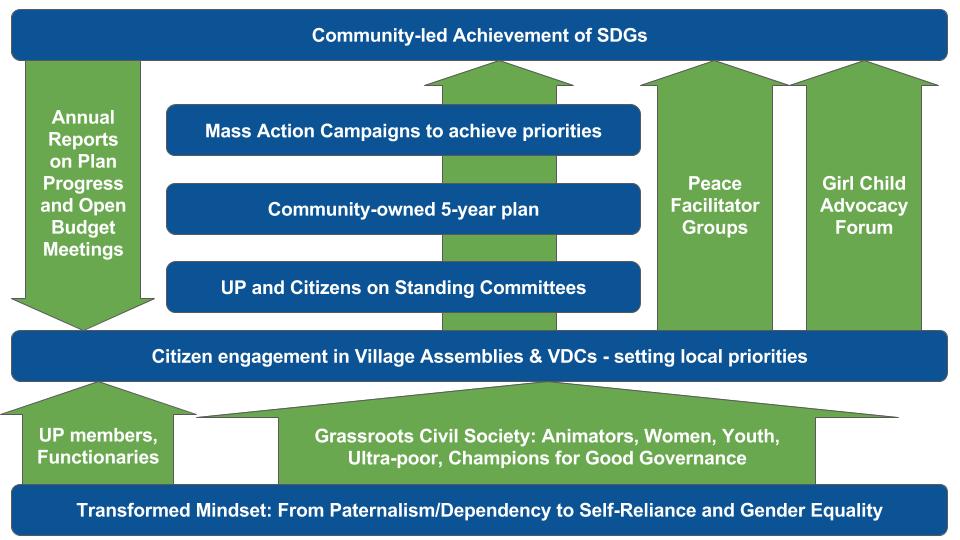 The Hunger Project (THP) has developed a comprehensive and systematic methodology for supporting rural communities to achieve the 2030 Sustainable Development Goals adopted by all nations including Bangladesh in September 2015. It has pioneered this approach in 185 unions across 52 upazilas and 28 of Bangladesh’s 64 districts.

The strategy is an example of the science of gender-focused, community-led development, which has shown great success when taken to national scale in Korea, Indonesia, the Philippines and the Kerala state of India. It is builds a strong and active partnership among:

Role of the people. People in SDG Unions, including women and youth, are awakened and mobilized to make them active as citizens and take action to achieve SDGs. Mobilization of people creates “social capital,” which can make up for lack of “financial capital,” and can be used for solving many social problems through social movements and social resistance. Community members carry out various campaigns to combat social ills such as child marriage, violence against women, substance abuse, and environmental degradation. Using the Participatory Action Research (PAR) methodology, the poorest of the poor are also mobilized to become “barefoot researchers” to identify the causes of their poverty, form “self-help groups” and take other action necessary to end their own hunger and poverty. Mobilization of the poor is designed to ensure that no one is left behind, which is an inspiring aspiration of SDGG.

Role of the UP representatives. UP representatives, receiving both statutory and transformational training, provide catalytic leadership not only to mobilize people, but also to ensure that the services people are entitled to actually reach them. UPs belonging to the SDG Unions sign an MoU to make the achievement of SDGS their priority, make the entire UP body functional, make standing committees effective and ensure social justice. The UP works in partnership with the citizens to hold Ward Shavas, Open Budget Meetings and prepare Five-Year Plans.

Role of the local civil society. Civil society is built up at the Union level, and consists of approximately 150 trained volunteers, including Animators, Women Leaders, Youth Leaders, PAR facilitators, champions for good governance and Peace Ambassadors. The members of the civil society on the one hand act as watchdog over the UPs and at the same time work in partnership with them. They also empower and mobilize the community members to ensure inclusivity and arrange skills training to help them become authors of their own future.

These four stakeholders, working together, constitute a Community-led Development Approach to achieve the SDGs (Coonrod, 2016). A recent study by four professors of Columbia, Princeton and Cambridge Universities, published in the Proceedings of the National Academy of Sciences of the USA, found that “community trust,” created through this approach in our working area, positively affect the poor’s economic decision making and thereby their poverty (Jachimowicz, Chafik, Munrat, Prabhu, & Weber, 2017). In addition to achieving better lives, one unique contribution of this “whole society” approach is peace at the local level since people working together transcend their differences and diminish conflicts (Majumdar, 2014).

Process of creating an SDG Union

The work of creating an SDG Union begins through transforming the mindset. For the citizens of Bangladesh who live in conditions of poverty, meaningful participation in decision-making seems like an impossible dream. For government functionaries operating within highly centralized, top-down ministries, the concept of direct accountability to citizens seems like an impractical nuisance. However, countries that have successfully implemented bottom-up planning and social accountability have found that it must begin with a profound shift in mindset of both functionaries and residents, from “benefactor/beneficiary” to “public servant/active citizen.” To achieve this, the SDG Union Strategy begins with a “Vision, Commitment and Action” workshop and the training of approximately 150 grassroots volunteer animators and other volunteers in each Union committed and skilled in facilitating bottom-up development.

Village Development Committees – Building Civil Society from the Bottom Up. Exercising citizen voice is a collective process; active citizens from each segment of society (women, youth, the ultra-poor) must form community-based self-help groups to make their voices heard, and must work together to put forward a concise set of shared priorities. In addition to the body of Animators, the SDG Union Strategy trains Women Leaders, Youth Leaders, champions of good governance and girl’s rights, and PAR facilitators who create groups among the ultra-poor. The leaders of each of these village groups meet together as a Village Development Committee (VDC) to coordinate activities.

Transforming Gender Relations. The SDG principle of “No One Left Behind” has special meaning in rural Bangladesh, where adolescent girls and women often are not permitted to participate in public life. Trained Women Leaders from the village therefore organize “court yard” meetings where all family members can participate and discuss sensitive issues, such as halting domestic violence including child marriage, keeping girls in school, good nutrition and other human rights.

Active Partnership with Local Government. UP representatives and functionaries participate in a five-day training that both transforms their mindset and provides them with statutory information, especially on implementing the bottom-up reforms of the 2009 UP Act. Based on this new approach, the UP:

Sustaining Peace and Social Harmony. The recent rise in violence, often exploiting religious and ethnic differences in hopes of partisan gains, is one of the greatest threats to progress on all the SDGs, and is central to SDG 16. For this reason, the SDG Union Strategy has begun creating Peace Facilitator Groups and training local Peace Ambassadors who can analyze the local situation and carry out actions that promote peace and social harmony. The Peace Ambassadors and other volunteers lead Citizenship and Social Harmony workshops to promote civic rights and responsibilities and peace at the local level. In 10 Upazilas, this process has resulted in the three major parties signing a Code of Conduct for peaceful resolution of any differences, collective action to halt violent extremism and promote pluralism to address identity-based prejudice.