Dr. Majumdar was born in February 1946 in Comilla, Bangladesh. He received his Bachelor of Commerce with Honors (1967) and Master of Commerce (1968) from Dhaka University. From 1970-71, he took his first trip to study in the U.S. on a Graduate Fellowship for International Understanding, sponsored by the Rotary Foundation, at Claremont Graduate School. He earned a Master of Business Economics (M.B.E.) from Claremont and then went on to earn his Doctor of Philosophy (Ph.D.) in Economics from Case Western Reserve University, USA.

Dr. Majumdar was a Lecturer at Dhaka University in 1969-70. He also taught at Seattle University, Central Washington University and Washington State University during 1976-91. In addition, he worked for NASA and the Saudi Royal Family. He came back to Bangladesh in 1991, resigning a full professorship in America.

He briefly served on the Board of Governors of BARD. He was a member of the Committee to Strengthen and Revitalize Local Governance, which was set up by the last Caretaker Government in Bangladesh. Dr. Majumdar has authored several books and published many articles in professional journals. He is also a popular newspaper columnist and television commentator.

Nasima Akhter (“Jolly”), Program Director. Since 1995, Jolly has devoted her services to the overall management, implementation and strategic planning of The Hunger Project-Bangladesh. She pioneered The Hunger Project’s National Girl Child Advocacy Forum—which connects 172 national and international organizations to discuss a wide range of issues affecting young girls in Bangladesh. In 2006, she helped establish the Enlightened Women’s Network, an organization that brings together women from different regions and empowers them at the grassroots level.

Prior to joining the organization, Jolly worked as an Assistant Director of Women’s Empowerment and Finance with TMSS, one of Bangladesh’s largest nonprofits focused on alleviating poverty and advocating women empowerment.

Prior to joining the organization, Swapan worked as a senior finance and administration officer with Royal Commonwealth Society for the Blind (now Sight Savers International), a UK based INGO promoting the social inclusion of blind children and adults. Later, he joined Assistant for Blind Children (ABC), another leading national NGO, as Manager of Accounts and worked there for three years. 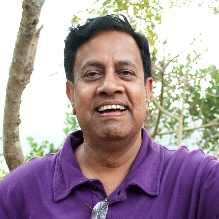 Ahsanul Kabir (“Dollar”) Program Manager, Knowledge Management Unit, is the longest-serving member of The Hunger Project’s team, since 1990. He has a Masters Degree in Economics from the University of Dhaka, and has taken post-graduate courses in Monitoring and Evaluation and Research Methodology. He is an expert in training, monitoring & evaluation, documentary film making & photography.

Dilip Kumar Sarker Program Manager, Local Government Unit. Dilip joined The Hunger Project staff in 2004 to lead its efforts in strengthening local governance. He received a Masters in Political Science from Rajshahi University, and participated in “Peace Building Training & Education Course” for the SAARC Emerging Leaders. He has also participated in exchange visits to India and Sri Lanka.

Jamirul Islam (“Jamir”), Program Manager-Training & Empowerment, has been involved with The Hunger Project as a team leader and capacity building expert since November of 2004. He. brings more than 21 years of professional experience in local government and community development, gender analysis, training curriculum development, team building and knowledge management.

Prior to joining The Hunger Project-Bangladesh, he was a Program Coordinator of Human Development and Training at PROSHIKA—a nonprofit organization focused on sustainable development, collective organization, and empowerment of communities living in conditions of poverty. He attained a Master of Social Science degree in Economics from Chittagong University.